Are You Angry? English Expressions 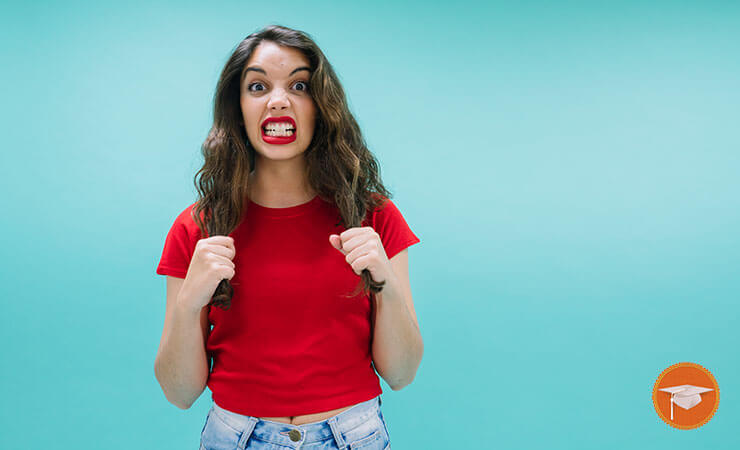 Negative emotions are loved by no one. Still, they happen. Irritation, discontent and anger often come even if we do not invite them. As a rule, difficult job, home, health or financial situations assist them. Thus, we should know how to express such feelings. Especially, in English!

Angry is the most common word to express irritation and dissatisfaction in English. Everyone, who starts learning this language, knows it. What should we say about people for whom English is native? Yes, you are right. They use it very often, when they are angry with/at someone, and say sentences like:

Did you notice that we are grammatically correct if we say angry with or angry at, but we can no way say angry (on)? I absolutely agree that all these prepositions in English can make everyone crazy, but we can do nothing, but learn them.


If unsuccess follows you within current life time or if you express negative emotions too often, than it is reasonable to notice colloquial synonym of “angry”, it is mad.

Don’t be mad at me! I did wrong!
My new boyfriend makes my mum mad.

Another lovely word, which demonstrates something more than simple dissatisfaction with the situation or person, is furious. It comes from “fury,” which means a grumpy woman. Ancient Romans called the goodness of vengeance with it.

You perfectly know, why am I so furious with you?
If you are not only angry, but very angry, you may also say incensed.

I am incensed at your behavior! How can you treat me like that?

People are called Homo sapiens, because they try to be governed by mind and not by emotions. Though, firstly, they do everything to calm down, but if stimulus is too long and too heavy they burst with emotions and run out of pattience.

You know that ordinary I don’t behave like this. I have just run out of patience that time.

Another synonym to the mentioned above expression is one’s cup is filled.

After an hour of waiting his cup was filled and he left.


The Arabs even have a special proverb to express the end of patience and say: It is the last straw that breaks the camel’s back. As soon as it became very popular the shorter forms of it came. They are the last straw, to break ones back. An English synonym to it is to be fed up with.

I am fed up with your lies.
His morning words were the last straw.

Everything around and inside us can bring negative emotions. The disposition of people around, everyday inconveniences, poor sleep, bad thoughts, unrealized dreams, depression or even bad weather often provide negativism to our live. Express it eloquently to eliminate it sooner!