The Catcher in the Rye Essay Sample 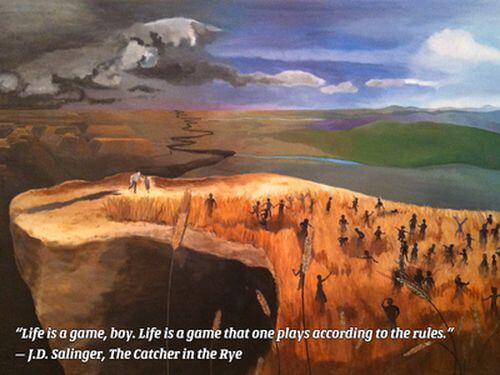 The Catcher in the Rye, written by Jerome D. Salinger in 1951, is one of the greatest pieces of American literature. Its main themes are teenage alienation and angst, as well as the issues of identity, connection, belonging, loss, purity, and innocence. The main character of the novel is a teenage boy who struggles while going through his adolescent years. His name is Holden Caulfield, and he can be called sullen by some people. He tells about several days of his life and shows his attitude to others. There is a subtle but a significant pattern an attentive reader can notice. While Holden manages to rescue others, he fails to rescue himself.

One of the examples when Holden shows his care for others is his respect for women. If a girl tells him that he is going too far, he stops because he gets to “feeling sorry for them.” Even when Holden meets a prostitute, he feels sorry for her as well, and a sexual intercourse between them does not happen. By his actions, Holden seems to be trying to save girls’ sexual purity. Nevertheless, by doing this, he loses the opportunity to find a girlfriend.

Another example is the incidence with Holden’s 10-year-old sister, Phoebe. When she claims that she is going to quit her school, he convinces her that she must not do it. Considering the fact that Holden has already ruined his own life by quitting the school, he cannot let Phoebe do the same thing. In this case, he once again manages to rescue his sister but fails to save himself from a failure.

When one day Phoebe inquires Holden what he would like to do, he replies that most of all he wants to become a “catcher in the rye” to save children from falling off the cliff. This aspiration of the young man manifests his desire to help the innocent. He believes that one can find purity only in a small innocent child. Therefore, he wishes to rescue Phoebe and other children from misfortune. In the meantime, Holden believes that his own innocence has been lost and he can do nothing to save himself. For this reason, he dreams about saving children in the rye field and protecting them because their lives have not been marred by phoniness, graffiti, and death. By doing this, he thinks that he can preserve the purity in this world.

Wishing to rescue purity in others, Holden forgets about himself. He fails to rescue his own innocence. He thinks that he is not pure anymore and gives up on himself. Unfortunately, Holden’s character does not seem to change by the end of the novel. He continues to bail others out, at the same time failing to understand that he is the one who actually needs to be saved.

Advance of Christianity in the Philippines

How to Excel at Your Math Class?

How to Deal with Tough Professors?

Top 5 Tips to Survive The Finals