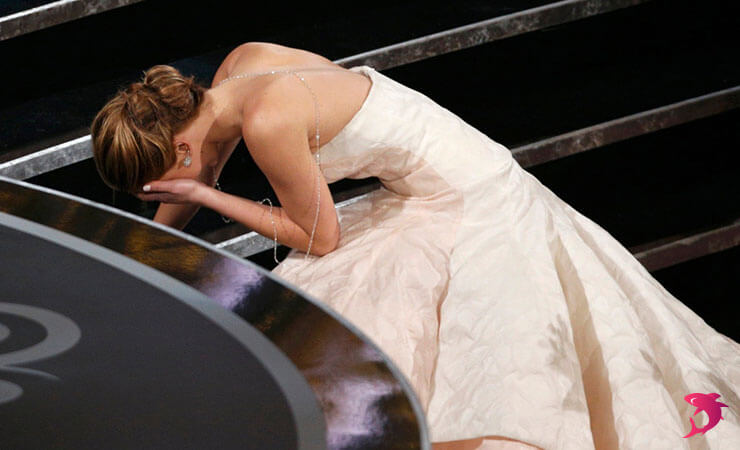 We always look forward to Oscar Ceremony with a certain aspiration. It is a great luxurious event of cinematography achievements. Every year, celebrities shine on the red carpet with a noble smile and expectation on their faces. Thousands of journalists cover the most successful movies, the most splendid dresses and the most unexpected fails that happen during ceremonies. Let’s have a look on the recent celebrity flops at Oscars.

5 most Famous Awkward Moments at Oscars

Oscars Best Actress of 2013 Jennifer Lawrence didn’t make her path to the stage smoothly. Her wonderful dress became an unforeseen obstacle on the stairs and she fell down. It was the moment full of glory and embarrassment at the same time.

from all orders made by people you bring!

Your people also get 17% discount for their first order

A social media break out of the ceremony Ellen DeGeneres’s selfie was too low to catch Liza Minelli at the back. Famous description was true, it read: “If only Bradley’s arm was longer.” Unfortunately, the celebrity appeared too short to be seen in the picture.

Everyone was impressed by Neil Patrick Harris that evening. He demonstrated an outstanding talent and his underwear at the stage. The audience gave an ambiguous opinion on his performance. Anyway, he stole the show.

Name at least someone who hasn’t seen posts about Leonardo Di Caprio’s way to Oscar in the Internet. Yet, a long-awaited success didn’t prevent from leaving the Statuette at the after-party. It means, after all, the title worth more than its material embodiment.

The audience won’t forgive this mistake for a very long time. Can you imagine announcing La La Land the winner of the best picture and then apologizing for the misunderstanding? That is exactly what Warren Beatty did when reporting Moonlight was the winner after all.

What is your favorite fail at Oscars? Share with us.

Books not to Read